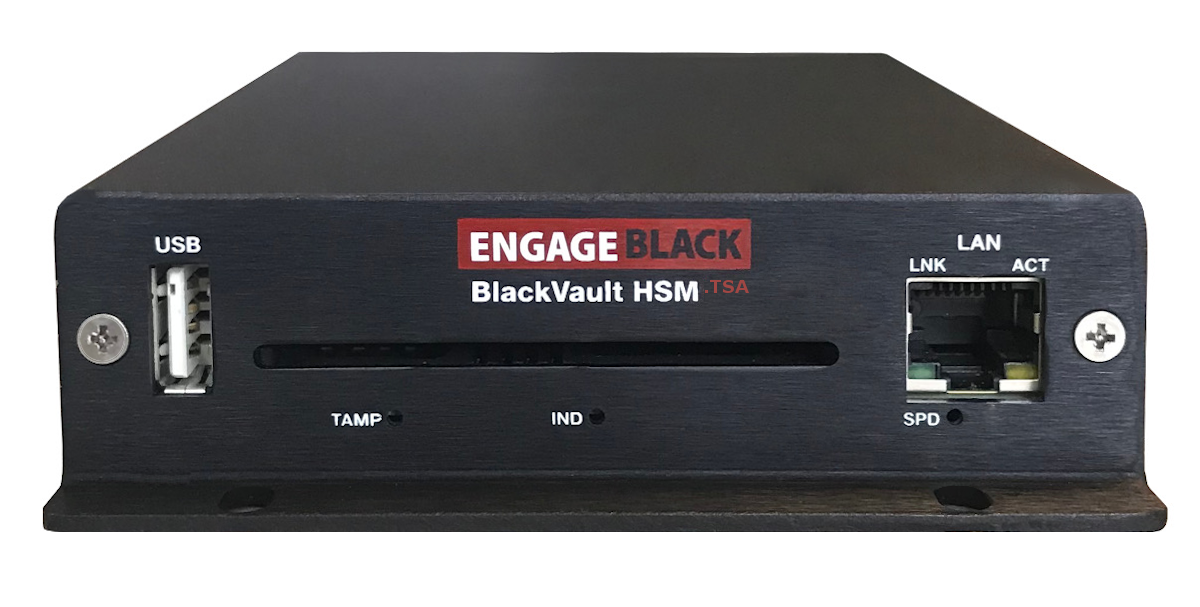 The BlackVault HSM.TSA is a Time Stamp Authority (TSA) product fully integrated with the network attached BlackVault HSM platform combining a cryptographically advanced HSM with creation and authenticity of timestamps. In response to the needs of customer with increasingly valuable digital signing practices and the need for enabling organizations to record when a digital item – ie. a document, piece of software or transaction – was signed. Time stamping is also crucial for stock trades, lottery ticket issuance and legal proceedings. In general time stamping is valuable for audit processes and record keeping as it provides proof whether the digital certificate was valid at the time it was used.

The BlackVault HSM.TSA ensures the tamper proof creation and authenticity of the timestamped data for many applications. Verify at all times, if the timestamped data matches the exact same form at the point in time it was logged by the timestamp. The BlackVault HSM.TSA complies with the RFC 3161 timestamp protocol. Administration clients initialize and administer the BlackVault HSM.TSA via a web application interface. The BlackVault HSM.TSA is designed to easily integrate into an existing infrastructure. The system is easy to set up which means it is both time and cost-efficient. All keys are generated and managed by Hardware Security Modules (HSMs), which means they are never exposed and cannot be tampered with. Administrators must log on to the HSM using smart cards with two-factor authentication with an “M of N” Quorum. Optionally you can enable TLS for additional security. Key sizes are configurable and easy to change via the web application. Timestamp operation are backed by NTP servers that are also configurable.

BlackVault HSM.TSA utilizes an intuitive iconic graphical user interface. A structured menu system facilitates straight forward configuration via remote management. The user interface presents Crypto Officers with a sequence of dialog boxes that lead through a series of well-defined steps to initiate the HSM and provision cards and keys.

Is a Powerful, easy to use, PKCS#11 CLI tool able to perform many different cryptographic operations that comes with every BlackVault HSM and works on Windows/Linux/MacOS both physical and virtualized. Some of the functions are:

Easy to Integrate
BlackVault easily integrates into a variety of applications, supporting numerous crypto APIs including PKCS#11, Java (JCE) and Microsoft CAPI / CNG, across a variety of operating systems.

Portable / Embeddable Form Factor
Its compact “hard drive” form-factor and redundant, battery-backed, solid state key storage allow BlackVault HSM.TSA to be moved to a secure room or safe without loss or compromise of root keys or other cryptographic material. Its small form factor with USB connection and power also supports mounting BlackVault HSM.TSA within application servers and other compact environments.

Real Time Audits
Constantly updated configuration and operation information provide Security Administrators with the data to discover anomalous activity or failure of critical functions. Audit information can be sent to a trusted entity and is protected to prevent unauthorized access, modification, or deletion.

Military Grade Tamper Reactive
BlackVault HSM.TSA cryptographic boundary is within the silicon of its secure CPU. This silicon die shield has dynamic fault detection with real-time environmental and tamper detection circuitry. It also avoids inadvertent tamper, making the BlackVault HSM.TSA safe to transport. When a tamper event is detected, the Cryptographic keys are zeroized (deleted).